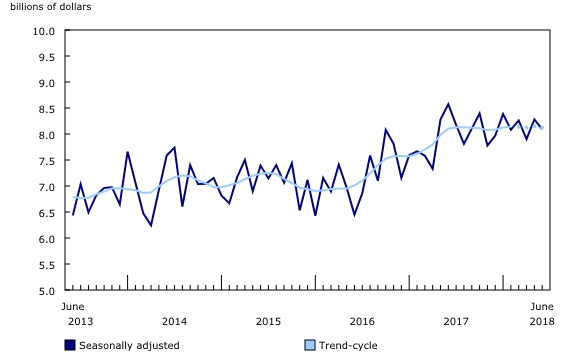 Aug. 8, 2018 – In June, Canadian municipalities issued $8.1 billion worth of building permits, down 2.3% from the previous month. The decline was the result of lower construction intentions for residential buildings, following a strong May.

Residential sector: Multi-family dwellings account for majority of the decline
In the residential sector, municipalities issued $5.2 billion worth of building permits in June, down 5.7% from May. New Brunswick was the only province to post an increase.

The value of multi-family dwelling permits dropped 8.0% to $2.8 billion in June. This followed a record high of $3.1 billion the previous month. The decrease was led by Alberta, where municipalities issued permits for 865 fewer units in June than they did in May. British Columbia (+2.1%) was the only province to register an increase.

The value of permits in the single-family dwelling component was down 2.9% to $2.4 billion in June. Six provinces posted declines, with Ontario (-$37 million) accounting for slightly over half of the drop.

Provinces and census metropolitan areas: Quebec reports declines in all components
The total value of building permits was down in six provinces in June, with the largest decline in Quebec. Meanwhile, construction intentions were down in 20 of the 36 census metropolitan areas (CMAs). In particular, Toronto and Calgary reported notable declines following strong numbers in May.

In Quebec, the value of permits fell 8.4% to $1.4 billion in June, as each component declined. This marked the third consecutive monthly decrease for the province. Five of the six CMAs in Quebec were down, the exception being Saguenay (+34.9%). The CMA of Québec reported $70 million worth of building permits in June, its lowest value since January 2006.

Conversely, Ontario issued $3.3 billion worth of building permits in June (+$43 million). The gain was the result of higher construction intentions for industrial and institutional buildings. Barrie reported the largest increase of the CMAs, issuing $105 million worth of building permits. The increase in Barrie mainly reflected higher construction intentions for residential dwellings.

The value of permits in the residential sector decreased 0.3% in the second quarter to $15.8 billion. An increase in the value of permits for multi-family dwellings (+$377 million) almost offset a decline from the single-family dwelling component (-$420 million). In the non-residential sector, declines in the institutional and industrial components contributed to a 4.6% drop in the second quarter, while the commercial component rose slightly.