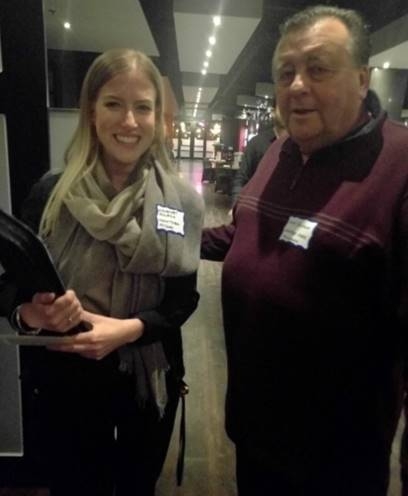 Its become something of a tradition! Rather than call it a simple, boring Annual General Meeting, we’ve tried to spice it up a bit and called it the Holiday Reception AND AGM.  Fenestration Manitoba members have an opportunity to mix and mill with fellow industry leaders at a relatively informal event while beginning to close off another eventful year.  And, inevitably and predictably, the Clay Oven does a very fine job in accommodating and serving lots of excellent East Indian food!

The 2017 FenMan AGM on December 3rd again drew a solid group of some 30 ish people – including FenCan president Lisa Bergeron – with a strong representation of the manufacturing industry combined with a wide range of suppliers.  President Ryan Dudeck, very capably assisted by Executive Director, Nancy Zubriski, led the proceedings.  A key element of the 2017 AGM was the overdue up-dating of the bye-laws, a process which involved the detailed editing by Gary Glowa, Inkster Park Millwork as well as Ryan and several others.  One of the key elements of the bye-laws is to ensure that there is a predictable process of refreshing the board composition as well as the leaders.

This was also an opportunity to recognize departing board member Dan Friesen, Berdick Windows.  Dan has spent 35 years in the window industry, at least half of that time in technical roles including 17 years as head of R&D for Willmar/Jeld-Wen. He’s consulted for major window manufacturers around the world and owned his own fenestration company for eight years before selling to Berdick. Dan spent many hours working with industry committees in both Canada and the USA developing suitable guidelines on various related topics.

The 2017 AGM was also something of a celebration of achievements.  FenCon17 proved an excellent success as it drew some 150 attendees, speakers and sponsors to a first year event.   In fact, the exit interviews indicated a 90% plus satisfaction rating and resulted in the launching of FenCon18, while considering it ultimately becoming a bi-annual event.  Nancy has worked diligently to up date www.FenCon18.com , create additional reminder cards and even attended the 2017 WinDoor show in Toronto to assist with the awareness of the event.

FenMan also achieved some on-going success with the now annual FALL (too many challenges with a spring golfing outing) Golf outing at the new venue, St Boniface Golf Club.  A solid turnout enjoyed another excellent day of golfing, interaction and fine dining.  Additionally, FenMan recognized and inaugurated the first Hall of Recognition member, Roland Toker.  Roland was easily chosen for this honor as he was in fact the first to recognize the need for industry group activities and organized the first several golf outings.

Finally, FenMan also recognized the success with the on-going Knowledge seminars which most recently featured presentations from Jim Larsen, Cardinal Glass and Raymond Roy, Guardian Glass.  The complimentary presentations allowed a room full of specifiers to gain some new insights into high performance glass assemblies with some unique insights on light commercial versus residential specifications.

The event also featured a short “elevator pitch” by Ian Marshall, Lean Champion, Canadian Manufacturers & Exporters on the Continuous Improvement sessions that they will be delivering in half day seminars on the second day of FenCon18.   Al Dueck, FenCon18 Event Chair, concluded the formal elements with highlights of the even stronger programming for year 2.  It is especially rewarding to see that all of the key manufacturing supporters such as Fentro Technologies, Loewen Windows, JELDWEN, Paramount and DUXTON Windows & Doors, Yarrow Sash, Berdick Windows and Alliance Door products have all renewed their registration commitments for FenCon18!  This provides very strong early momentum for attendance by MANUFACTURING personnel – a very key target for this event and its sponsors and educators!

Building the formal organization and activities of Fenestration Manitoba is a somewhat predictably long process.   However, there is a strong belief that this journey can be very beneficial to the local industry in many different ways including gaining stronger insights into regulatory requirements, accessing more production technology and placing it on a stronger footing internationally.  It should be noted that perhaps the biggest benefit for participants is the opportunity to develop their own skills and experience in the process for the benefit of their own careers and organizations! It’s a journey, remember.  If you’re not living on the edge (at least at little?), you’re occupying too much space!